A classic adventure game for computers!

So much to do in a divided world!

Minecraft harness: mine, crafting, and survival

Two easy to use game modes 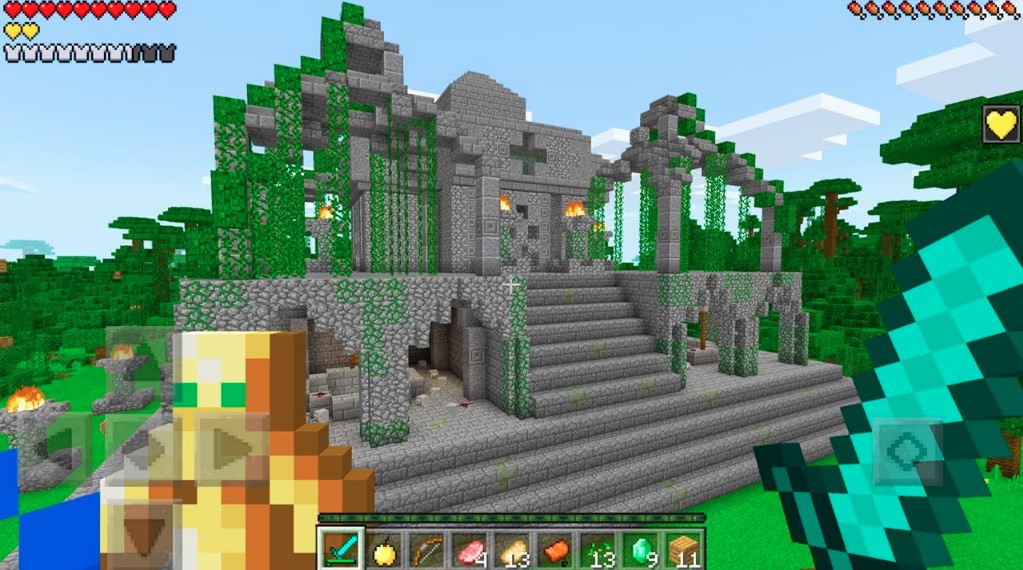 A world of your creativity and imagination!

The sandbox game for Windows 10

Minecraft Windows 10 Edition is the official version of the popular sandbox game for Windows 10 PCs. With the perfect blend of survival, creativity, fun, and adventure, this Minecraft download lets you explore expansive worlds. You need to survive in a pixelated, blocky world, where monsters haunt you throughout the night. To protect yourself, it’s important to build structures, sheds, buildings, and just about anything else. Over the years, Minecraft has released different versions of the game, including the popular Java Edition. However, the essence has remained the same. In the game, you need to mine, build, and collect materials to overcome obstacles.

The perfect game for Windows 10 PCs!

Minecraft was released more than a decade ago. Since then, Mojang has released a version for every gaming console, Microsoft PC, tablet, smartphone, and other devices. At the core, this leading sandbox game is based on survival instincts. While the focus is on a retro-looking pixelated world, Minecraft Windows 10 Edition comes with improved graphics and soundtracks. Like previous versions, when you download Minecraft, you need to collect and harvest supplies, run from monsters, build homes, and protect yourself at night.

With the ever-increasing popularity of the game, it was about time that Mojang released a dedicated version for Windows 10. Compared to Minecraft Beta and Minecraft Education Edition, this one is an ideal choice for sandbox game lovers and hardcore fans.

What are the objectives of Minecraft Windows 10 Edition?

If you’re playing Minecraft for the first time, you’ll enter the game as a confused soul, without any knowledge of the objectives. The lack of instructions, tutorials, and other content keeps you engaged. In the beginning, you can only build items with your hands. When the night approaches, the mobs, monsters, skeletons, and creepers start roaming the expansive world. You, in response, need to take shelter if you want to survive.

In a hostile world, the only way to keep yourself protected is through shelters. With these huts, you’ll receive new abilities and powers. To build shelters, you need to mine and gather materials. These could be rocks, dirt, branches, and other items in the building-block style game.

As the game proceeds, you’ll want to gather materials and items faster to craft tools as well. This will require you to arrange specific materials in certain configurations in either the inventory or a ‘Crafting Table’. If you don’t want to spend the entire night in a small hole, you need to build nice houses.

It’s worth mentioning that Minecraft Windows 10 Edition isn’t an empty world. The entire landscape has been broken into specific ecosystems, each with its minerals, biomes, and other elements. Among sandbox games, Minecraft download is the perfect outlet for creativity, fun, and imagination.

How many modes are there in the game?

Like Roblox and other similar titles, Minecraft lets players switch between different modes. In Survival Mode, you encounter monsters, which can pop-up anywhere in the world. While you can fight them, your best bet is to seek shelter through the night. You can use everything at your disposal to keep yourself protected.

In Creative Mode, the world is free from monsters. However, you need to tackle other threats, such as hunger. The ‘LEGO’-styled environment in the game has been extremely popular among kids and adults alike. With support from a thriving community, Minecraft Windows 10 Edition encourages creativity without a doubt.

Does the game have good graphics and music?

While Minecraft comes with plenty of features, the graphics take the centerstage. Whether you play the game on Windows or the Android app, landscapes look dramatic, with everything lovely to watch and explore. The blocky style makes it easier to identify a wide range of materials without experiencing any issues. Sound effects are effective yet simple, ensuring minimal distractions while you build amazing structures.

With a single click, you can shift a single player world into a multiplayer version of the game. This is an excellent way to share your creations with the world and let you engage with friends and hardcore fans online.

Unlike Raft, the best part about Minecraft Windows 10 Edition is the cross-platform play. While playing the game on your PC, you can pick up the saved progress on your smartphone. Similarly, you can continue playing on Xbox or other devices. The only downside is that Mojang has stripped down the online experience for mobile users. While this is a deterrent for people wishing to play on smartphones, it doesn’t affect PC users much.

While you appear in the expansive world without any instructions, the game lets you explore everything with ease. The primary objective is to keep yourself safe from monsters, mobs, skeletons, and creepers. You can build anything and everything with a wide range of tools.

The leading sandbox game for fun!

Minecraft Windows 10 Edition has been specifically designed for Microsoft Windows 10 PCs. With customizable settings and configuration options, the popular sandbox game lets you try out different modes with friends. The graphics have improved, and the game retains its true essence as a Minecraft-based adventure. If you own a Windows PC, you should download Minecraft right now to explore worlds full of fun.